Bloomsbury streets were stained with blood as protestors clashed with police during demonstrations. What began with the occupation of Senate House ended with a total of 41 arrests: five from the occupation and a mass arrest of 36 on Thursday 5 December. These included London Student editor Oscar Webb (the third of four ULU sabbatical officers to be arrested this year.)

On Wednesday December 4, around a hundred students occupied the management corridor at Senate House, which contains University of London Vice-Chancellor Adrian Smith’s office. They asked workers to leave and issued demands. These included full pensions for outsourced workers, part of the 3Cosas campaign, and that ULU remain under student control. They also called for UoL student halls to cost no more than the annual undergraduate maintenance loan (£4988/annum).

The University of London increased security throughout the afternoon, photographing those reporting on the occupation from outside. At 7.20pm, in a show of force unseen before for a civil matter, police entered the building. Some occupiers were dragged out, in some cases by their hair, handcuffed and thrown to the ground before being ejected from the building. The majority, however, nipped down a hastily purloined ladder from the south balconies of the occupied rooms to escape unhindered.

Tensions came to a head as police chased protesters around the car park to get them to leave, indiscriminately throwing punches and arresting one student. As the van containing him left, it was followed by demonstrators who built an impromptu barricade of bins across Malet Street. This appeared to fox the driver for a while, before he remembered he was in a riot van and could drive through them.

Keen to protect their vans from shouting protesters, the police began to throw people aside. Video footage has emerged of one girl running from the scene followed by police officers, who then slammed her to the ground. A running battle of police and protesters made its way onto Torrington Place, as a young man was forced to the ground in the middle of the road and one officer was clearly seen punching a man in the face.

A total of eight riot vans were deployed for around a hundred people and the night saw three arrests, all of whom were released the following day.

The University of London released a statement decrying the protests. Chris Cobb, Chief Operating Officer and University Secretary said of the occupation that “invading our working environment and blocking fire escapes is potentially life-threatening and plays no part in democratic dissent. The University will never …enter into dialogue with any group…who adopt this approach.” The University remained silent over the police’s response to the demonstrators, though ULU Officers condemned it.

On the afternoon of Thursday December 5, 150 students gathered for a pre-arranged demo to call for ‘Cops Off Campus’; after the demonstrators proceeded to Senate House, nine riot vans arrived with around 60 officers inside, perhaps missing the point slightly. While protestors chanted ‘No justice, no peace, fuck the police’, the officers attempted to block any exit through Russell Square.

With rain drenching the demo, the crowd had no choice but to return to ULU, where they were met by more police. As a helicopter hovered above, the officers took to watching the crowd continue to Euston Road, but when the protest brought cars to a standstill the police moved in again. The protest was split into two groups, with many being kettled into Euston Square station.

One student, trying to escape, was thrown to the ground by three officers before being driven away, leaving the pavement where he was tackled marked with blood. Eyewitnesses recognised an officer who had punched a man in the face on Malet Street busy knocking a student’s crutches out from under him and arresting him.

By this point, around 40 protestors remained trapped by police, who then began the process of arresting each person kettled – including London Student editor Oscar Webb – for affray. Extra vans then arrived to transport those arrested to various stations around London, including Croydon and Bromley. A UCL student who had left his lecture and was concerned with getting his nicotine fix was caught in the kettle as he walked up Gower Street, arrested and released in Croydon at 2am Friday morning.

Protestors were later released with bail conditions including not setting foot in Senate House or UCL buildings unless expressly invited by management or attending pre-arranged academic events. Some arrestees’ conditions bar them from associating in groups of more than four people, including themselves, in any public place.

A further demo was called immediately afterwards, on Friday 6. Whilst attracting a similar number of people, there were no arrests. Although the policing was heavy and attempts to kettle the protest were made, the event passed without arrests. The University of London’s response to was to obtain an injunction to ban ‘violent and intimidating’ student occupations on its Bloomsbury campuses until June. Despite this, a national day of action against police on campuses has been called for Wednesday December 11. 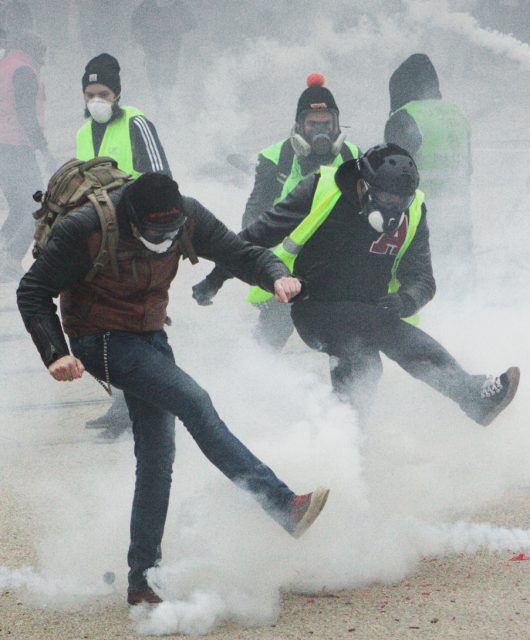