Leaving the samba bands and banners of the main TUC “march for a future that works” at Trafalgar Square at about 2 o clock, we joined a group of students wearing black – presumably the “black bloc”? – heading up the Charing Cross road. 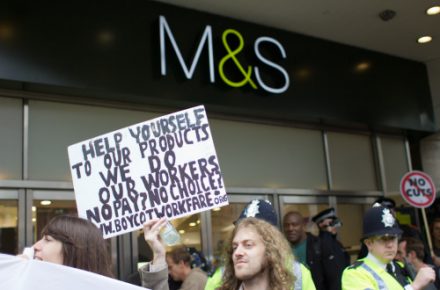 On reaching Oxford Circus, the group we were following merged with others, similary wearing black, in the centre of the junction and stood around for about twenty minutes, apparently no one quite knowing what to do. The police began arriving in large numbers, which seemed to spur people on to get moving.

Suddenly, everyone starts running down Oxford street. What’s their first target? The black bloc in this action, as far as we could make out, were anti-workfare but they targeted quite a random assortment of shops. There were a number of Annoymous flags as well as other anarchist groups’ flags. Starbucks was the reccuring target, with the chant being predominatly: pay your taxes. So UKuncut clearly had a presence too. 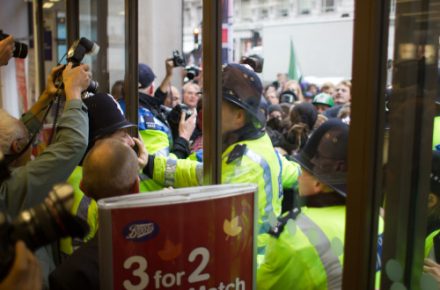 The first target is a seemingly random hotel on Great Malborough Street. The dynamic is one that recurs: people rushed in, most of whom were press and police; a brief discourse occurs between a manager and protestors and then the protestors leave, without the police physically forcing them out. Unlike the UKuncut occupation in Fortnum and Mason during last year’s TUC march, there was never a real attempt to remain in the premises for longer than a few minutes. 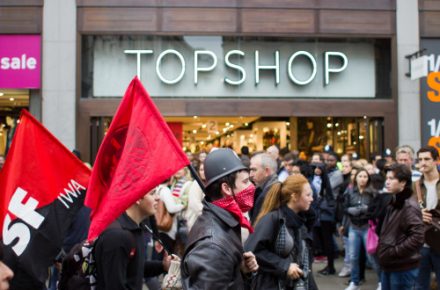 Next: running back onto Oxford street. McDonalds, Starbucks, Top Shop, Primark and Boots are all “occupied” one after the other. The police are not making arrests – protestors are readily leaving shops when told to do so. The shopping crowds are looking quite puzzled. Some passers by are knocked over as the protestors surge into shops. Shop shutters are coming down quickly now as the bloc passes by and police are quick to get to shops before protestors.

Running all the way up to Marble Arch and back again, protestors, police and press are all noticibly tired by the time the bloc reaches the bottom of Tottenham Court Road and proceeds down Charing Cross road. It continues down to Trafalgar Square and the Strand – targetting a few more Starbucks and Boots on the way – where it peters out at about 5 o clock.

We didn’t see any arrests, though there were a few scuffles between police and protestors. And despite other student newspapers reporting it (LSE’s The Beaver), we didn’t see any protestors attempting to smash shop fronts.

Running around central London certainly turned out to be a great cardiovascular workout, but whether it had any real value as a form of protest is questionable.